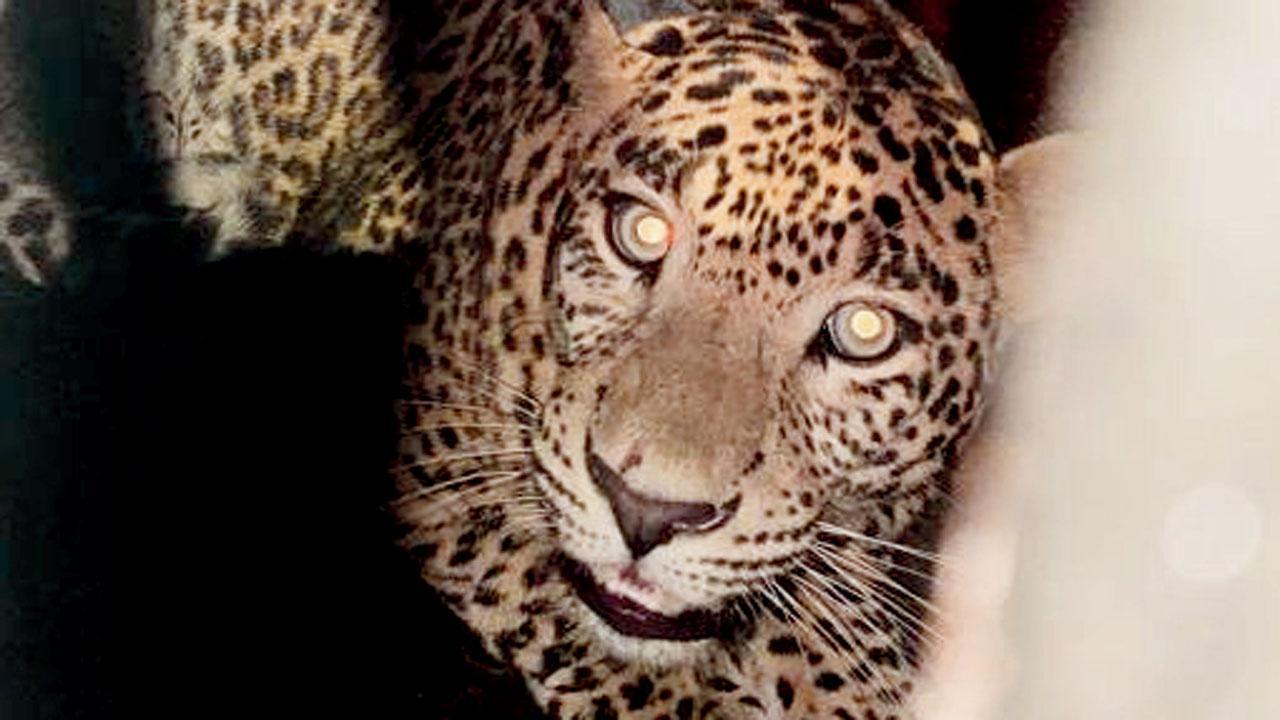 A leopard that had entered a building at Chinchpada in Kalyan East on Thursday was finally caught after a challenging rescue operation that went on for 9 hours. During the process, the frightened big cat injured three people in self-defence. Fortunately, the Forest Department and the police ensured there were no more such incidents. However, their job was complicated due to the crowds that gathered to see the animal.

Talking to mid-day, Deputy Conservator of Forests (DCF), Santosh Saste from Thane Forest Department (Territorial) said, “In the operation that took place for close to 8-9 hours, the leopard that had entered a building in Kalyan was successfully tranquilized by our team. It was one of the most challenging operations that our team has participated in.”

One of the residents he injured

On Thursday, around 8 am, the adult male leopard entered Anurag Society near Vitthalwadi in Kalyan East. Honorary Wildlife Warden of Thane District, Avinash Harad, said, “A local staying in the building informed the forest department about the leopard.” As a precautionary measure, the department told residents to close their doors and windows and not provoke the leopard, as it might then attack people in self-defence.

While some people are surprised about the sighting of leopards in the area, Honorary Wildlife Warden Avinash Harad told midday that it is not surprising. “There exists a wildlife corridor connecting Bhimashankar Wildlife Sanctuary with Tansa Wildlife Sanctuary and Hajimalang Forest, and the forests in Kalyan, Ulhasnagar, and Badlapur fall in between the corridor. Time and again, there have been reports about leopard sightings from the Hajimalang forest, and there are high chances that the leopard that had entered the building might have come from there.”

“It’s high time that we give protected status to the forests falling in between the corridor so that such instances are avoided,” added Harad. Apart from the leopards, the wildlife corridor area is also rich in bird biodiversity including raptors population. On Thursday morning the news about the leopard spread like wildfire in the area, and hundreds of people gathered outside the building to get a glimpse of the big cat.

Range Forest Officer from Kalyan reached the spot along with his staff in less than an hour. Trapping the leopard was not an easy task because of the hundreds of people gathered. The forest department officials along with the police officials had the task of not just rescuing the leopard but of keeping the crowd away from the building. There were high chances of the leopard coming on to the road and creating a havoc.

To ensure that the leopard does not injure more people, the forest department staff evacuated the B wing of the society. They then drove it towards the wing where other forest department staff sitting on the fourth floor darted it. The full grown leopard has been taken to the Leopard Rescue Centre at Sanjay Gandhi National Park.

The leopard rescue team from SGNP and Thane along with the forest department staff  had volunteers from NGO Wildlife Welfare Association, SEVA helping during the rescue operation. Harad and HWW Rohit Mohite were also present. Assistant Conservator of Forests (ACF) Girija Desai was also present along with SGNP Veterinary Officer Dr Shailesh Pethe.

Anurag Society in Kalyan East which the leopard entered

A local from the area said, “In the morning when the leopard entered the building it attacked one person. It had no way to escape as the entry and exits were closed and so it kept roaming between the ground floor and first floor staircase. In the afternoon it injured another person and later a forest department staff member was also injured. All the injured were rushed to the hospital for further treatment and their condition is said to be stable.”

In order to prevent the leopard from coming out of the building, nets were placed.  Range Forest Officer (RFO) R N Channe said, “Rescuing the leopard from a highly human dominated landscape was an extremely challenging task. The leopard had taken refuge on the ground floor of the building with two wings. Our main intention was to rescue it but at the same time we had to make sure that the leopard does not come out as there were hundreds of people on the road. Multiple government agencies including the police department, municipal corporation, fire brigade and forest department teams including the leopard rescue team from SGNP and Thane played an important role in rescuing the big cat which was darted around 5.50 pm on the fourth floor of the building.”