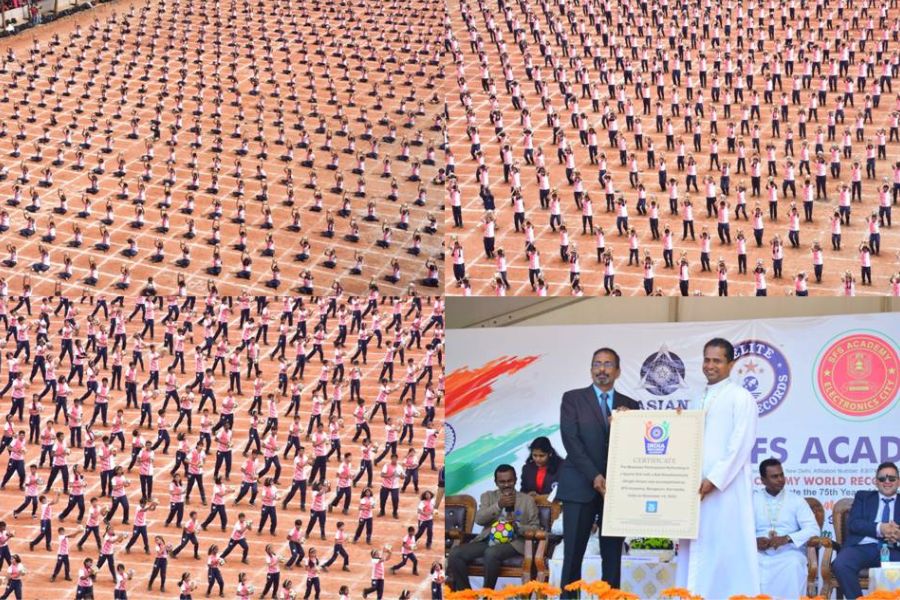 
Bengaluru, India, November 19: SFS Academy aims at imparting high-quality education to prepare the young, for opportunities for life in the fast-advancing modern society, the primary focus of SFS and its academic fraternity is on knowledge, excellence, love and service. In SFS it is a journey that inculcates not only knowledge but also ensures holistic development.

Dr.P.M.Lawrence, Principal, detailed that in order to celebrate the 75th Year of Indian Independence and Children’s Day-2022 we celebrated “SFS Academy World Records Festival-2022” where in all our students and teachers have expressed their hidden potentials competing in a global platform by way of world records. 2340 students and teachers came together and created history in form of world records certified by Elite World Records, Asian Records Academy, and India Records Academy for the titles Largest National Flag made with Origami Boats, Most National Flags Coloured by a Team in 1 Hour and Most Participants Performing in a Sports Drill holding a Ball.

He further stated Benny Marangoli, Councillor of Education, South West India Province of The Missionaries of St.Francis De Sales (MSFS) was the Chief Guest and Cyril Anand, Director-Ooredoo(Qatar), was the Guest of honour at the event. Joshy Philip, Correspondent and Vinod Kanat, Finance Administrator also chaired the event and appreciated the participants for their incredible feat.

Dr.Satyasree Gupta, Adjudicator-Elite World Records, pointed out “Fitness and indigenous sports is very important, it paves way for moral and physical health as well”. Promoting fitness as easy, fun and free at school is very important and SFS Academy has fulfilled the same by educating and imparting indigenous sports and fitness at all levels. In context of emphasising health is wealth 1239 participants of SFS have set a record by Performing in a Sports Drill holding a Ball for 4 minutes 33 seconds without a break, which is remarkable she appreciated.

P.Jeganathan, Senior Records Manager-India Records Academy, elaborated that “students of SFS Academy made 600 Square meters Largest Indian National Flag with 2.34lakhs Origami Boats”, followed by which they appropriated a pledge emphasising “Green and Clean India”, and also to bring glory to our great country, 1781 participants coloured 4036 Indian National Flags in 60 minutes, post which they took a pledge focusing “My India! My Pride!”, which was patriotic and an incredible achievement he further stated.

SaiSwaroop Grade-VII said “I have never seen such a large national flag covering the entire basketball court. I felt proud of our team efforts by seeing the Tricolour flag made of paper boats. I thank my school for giving me this opportunity to be a part of it”.

Kirnan of Grade-IX said “I am proud to be a part of SFS World Records Festival; I thank my principal for making this possible”.

L.QueenMary teacher said, “We were worried due to continuous rains but by God’s wishes and with the help of parents support we managed to complete this herculean task”.

Veena.P teacher said, “my children found it difficult on the first day of the training but couple of days later they started enjoying making paper boats and a small competition had started on who will make the most perfectly”

Debjani Sengupta, Academic co-ordinator of SFS Academy said, “we are grateful to all the parents who had supported this event, they not only gave their consent for their wards participation but also volunteered in taking away some of the organising responsibility from the management”.

Ayyapparaja.K. parent of Kaushik said, “I did not expect to see such an effort from the school for this event. Largest National Flags, Most National Flags Colored, Patriotic songs, love, talent, respect, creativity, confidence, inspiration, energy, fitness, colours, and sports were all put together into this amazing feat”

Prakash Rao grand parent of Sangvi and Sangalya said, “I came here from Vijaywada to meet my grandchildren few weeks back. I was supposed to return last week but my grandchildren insisted that I stay back to see this event, I was not sure if I should stay back but now, I feel very fortunate to have stayed back and witnessed all these. I have never seen anything like this in my life and I am glad that my grandchildren are now the champion of champions the world champions”.

The event witnessed lots of applause from the spectators.

If you have any objection to this press release content, kindly contact pr.error.rectification[at]gmail.com to notify us. We will respond and rectify the situation in the next 24 hours.